This blog post originally appeared on southwestraleigh.com, by Jason Hibbets 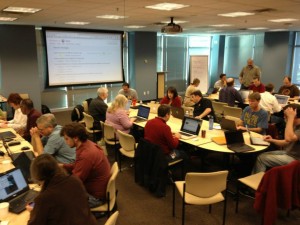 Almost 50 people collaborated today at Red Hat headquarters, currently located on Centennial Campus in Raleigh, NC, to participate in Triangle LocalWiki Day. The event was a soft launch of Triangle LocalWiki, an effort to document the Triangle region and increase collaboration and knowledge sharing across the area.

The day started off with a brief presentation [PDF] by Jason Hibbets on how the LocalWiki project fits in with the CityCamp Raleigh movement, as well as the larger open government picture and civic innovation week, Code Across America, by Code for America.

Raleigh At-large City Councilor Mary Ann Baldwin keynoted at the event. She spoke briefly on the importance of collaborating on a project like LocalWiki. She also mentioned that she was wearing multiple hats: City Councilor, a marketer, and a member of the Innovate Raleigh steering committee. Part of Triangle LocalWiki Day is to start mapping the assets for the #InnovateRal initiative and to be an authentic part of Raleigh’s open source philosophy and open-minded communities.

Reid Serozi, Triangle LocalWiki project lead, provided the background on LocalWiki, showing a video from Philip Neustrom, one of the project co-founders of LocalWiki and DavisWiki. Then he walked the attendees through LocalWiki 101. We learned how to register an account, create new pages, and edit existing pages. After that, the edit party began.

Right away, people started creating pages, collaborating with each other, and helping one another with LocalWiki best practices, formatting, mapping, and more. By 10:30am ET, #triwiki was trending on Twitter in Raleigh.

The group made a lot of progress. Fueled by Klausie’s Pizza for lunch and a bunch of snacks and soda provided by organizers, here are the results of Triangle LocalWiki Day:

The event wrapped up around 2:00 pm and contributors continued to add pages after the in-person collaboration with a goal of 1,000 pages by March 14.

While I haven’t been as-involved with LocalWiki as I was with CityCamp Raleigh, the event was very fulfilling for me. I believe in the power of open source and collaboration and Triangle LocalWiki Day was another example of this success. It’s also building upon the momentum of the Innovate Raleigh Summit held on January 18.

LocalWiki is about creating something anyone with local knowledge can contribute to. It brings together people with different skillsets—ranging from tech-saavy know-how to photography, local history to hackers, and much more. Triangle LocalWiki is basically community knowledge done the open source way.

This work is licensed under a Creative Commons Attribution-ShareAlike 3.0 Unported License.